Mee's Adventure and a history of solo adventures

When I was a child, one of my first encounters with Roleplaying (a hobby that has come to dominate my life) was through solo adventure gamebooks — the likes of Fighting Fantasy, Lone Wolf, Way of the Tiger, and the excellent Asterix gamebooks (which included code breaking and menhirs). I was hooked from the first one I read, and bought every one (usually second hand) that I could get my paws on.

Naturally I was obsessed by the concept of making my own, which involved assembling tiny pamphlets from coloured paper and writing them in paragraph by paragraph (with, generally, little to no advance planning). I designed cut-down rules systems based on my Termite RPG, first Grasshopper, and then the even simpler Flea, which had only one stat — Luck.

Later, when I learnt about computers, I translated that love of solo-adventures into early programmed attempts. At that time my tool of choice was the late lamented Hypercard. I designed a Hypercard toolset for makeing solo adventures (I think it was called "Adventure Maker"). These were still text based, but now had a much more complex set of adventure codes and items based on Fabled Lands. The idea being that you could transfer a character from adventure to adventure, in any order, carrying over your magic items, spells, and accolades.

The adventure maker project was probably too fancy for its own good, and I don't think anyone ever played the games other than me. Not long after, however, the World Wide Web came along, and hypertext provided the perfect medium for more solo-adventures. In the mid 90's I was the webmaster for the GEAS Village, which was the grandly named website for the Grand Edinburgh Adventuring Society — the University of Edinburgh's Roleplaying club.

The GEAS Village was a pretty grand undertaking in its own right. It had hundreds of pages: forums, before the concept of forums as we know them; an encyclopedia of roleplaying; complete games systems; parody card games. It was full of art, some of which survived the 90s and formed the foundation of my later Virtual Pet Site grophland.com, and it also had a solo-adventure.

The adventure was named Beneath the Village and was accessed from multiple points in the village itself. New sections were released over time, enlarging the story. It was never the most popular part of the Village, but it was one I was inordinately proud of. I even enhanced it with the occasional interactive element written in Perl CGI. A few years ago I ressurected it with the help of some javascript, and a bit of PHP (the original was just a big page full of links) as Beneath the Village.

I made a few other experiments in the same direction in later years. Neopets, for a while, allowed people to create their own adventures, and I wrote one set in a haunted house, with sanity rules inspired by Call of Cthulhu. Largely, however, I moved away from solo adventures and into tabletop RPGs, fiction, and multi-player games.

My most recent gaming project is Inbetween Roleplaying Game, a game about tiny rodents living in the walls of human houses. InBetween also has a history that runs all the way back to the GEAS Village, and recently it came full circle when my friend Kay Gillespie created Mee's Adventure, a solo game set in the world of InBetween. 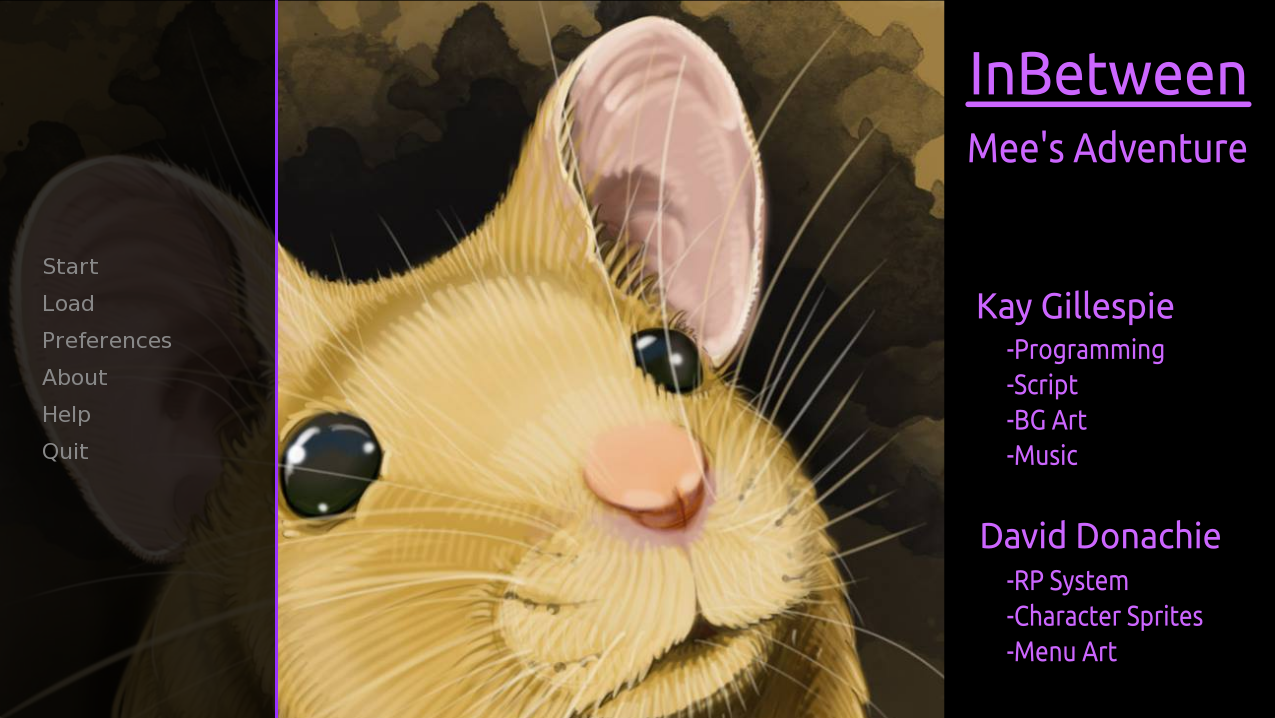 Mee's Adventure is created with Ren'Py, a Visual Novel creation package written partly (or entirely?) in Python. Ren'Py novels are Python scripts, written with branches and choices, presented on a stage made up of static sprites — background and talking heads. It is much less game-oriented than the also fascinating StoryNexus on which Fallen London was based, more like a the classic roots of Choose Your Own Adventure — no stats, no dice, just narrative and choices. I love it.

Unlike the other projects I've talked about above, my contribution to Mee's Adventure lies in the setting, and the character art, rather than the story, so playing it was a surprise for me, one which involed a lot of dying!

If you share my passion for solo adventures and gamebooks, give it a go!